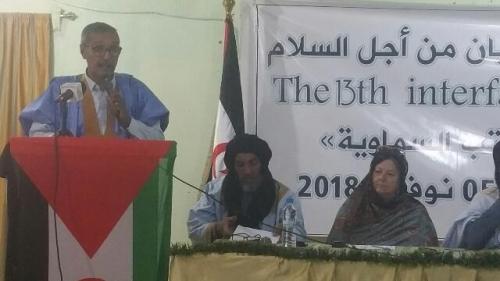 Boujdour (Refugee Camps) — The 13th Interfaith Dialogue for Peace, held under the theme “Family in the Divine Books”, on Monday evening concluded its work in the Wilaya of Boujdour, Saharawi refugee camps with the presence of members of the National Secretariat, the Saharwi Government, the National Council, as well as foreign delegations from Algeria, America, France and Portugal

At its closing ceremony, the dialogue has issued a series of letters to the heads of Algeria, the United States of America, the Pope, the President of the Organization of Islamic Cooperation calling for concrete steps to end the colonization of Western Sahara and to accelerate the right of the Saharan people to freedom and self-determination.

This year’s edition was attended by scholars and imams from Algeria, France, Portugal and the Saharawi Republic (SADR), in addition to priests and researchers from the United States of America. SPS