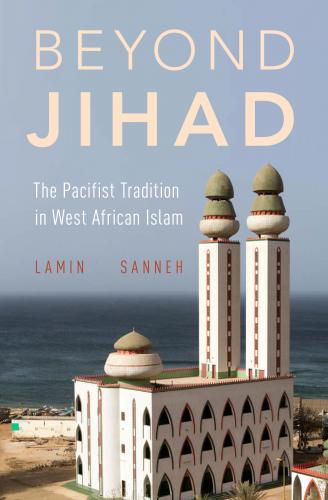 Beyond Jihad: The Pacifist Tradition in West African Islam by Lamin Sanneh

Over the course of the last 1400 years, Islam has grown from a small band of followers on the Arabian peninsula into a global religion of over a billion believers. How did this happen? The usual answer is that Islam spread by the sword–that believers waged jihad against rival tribes and kingdoms and forced them to convert. Lamin Sanneh argues that this is far from the case. Beyond Jihad examines the origin and evolution of the Muslim African pacifist tradition, beginning with an inquiry into Islam’s beginnings and expansion in North Africa and its transmission across trans-Saharan trade routes to West Africa. The book focuses on the ways in which, without jihad, the religion spread and took hold, and what that assimilation process means for understanding the nature of religious and social change.

At the heart of this process were clerics who used educational, religious, and legal scholarship to promote Islam. Once this clerical class emerged it offered continuity and stability in the midst of political changes and cultural shifts; it helped inhibit the spread of radicalism, and otherwise challenged it in specific jihad outbreaks. With its roots in the Mali Empire and its policy of religious and inter-ethnic accommodation, and going beyond routes and kingdoms, pacifist teaching tracked a cumulative pathway for Islam in remote districts of the Mali Empire by instilling a patient, Sufi-inspired, and jihad-negating impulse into religious life and practice. Islam was successful in Africa, the book argues, not because of military might but because it was made African by Africans who adapted it to a variety of contexts.

“[T]he level of scholarship, critical use of historical and religious source material, and insightful interdisciplinary approach make this book not only a good read but an outstanding contribution to Islamic, West African, and comparative religious history Highly recommended.”–CHOICE