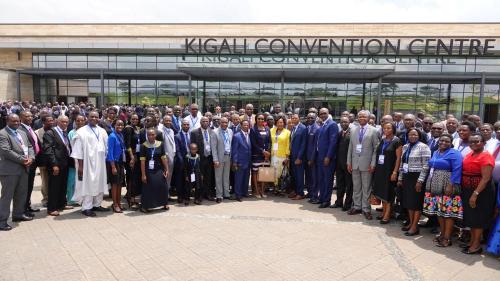 Twenty-four years after a bloody genocide left as many as 800,000 people dead and millions displaced, a peaceful and prosperous Rwanda welcomed more than 500 religious freedom delegates and advocates to the 3rd All Africa Congress and Festival of Religious Liberty on September 13, 2018.

The “Hope for Building a Tolerant and Peaceful Continent” event, organized by the All Africa Religious Liberty Association (AARLA), brought together hundreds of church leaders, government officials, and religious liberty leaders and advocates at the state-of-the-art Kigali Convention Centre in Kigali, the country’s capital, to celebrate religious freedom.

“We have come to recognize the need all of us have of enjoying religious liberty, and this is a public forum to celebrate religious freedom for all,” said Blasious Ruguri, East-Central Africa (ECD) church region president and chair of the All Africa Religious Liberty Congress and Festival (AARLC) organizing committee, in his opening remarks. “It is a call to celebrate what is most uniquely human — our conscience.”

In elaborating on his statement, Ruguri explained that freedom of conscience is the basis of all other liberties and human initiatives. “It is impossible for man to truly love each other without having the freedom to worship his God.”

In sharing the purpose of the Kigali congress, Ruguri said that such a gathering, which takes place every five years, goes beyond celebrating religious freedom. It’s more than just getting together, he emphasized. “This is not a place to just share wishful thinking,” he said. “We expect positive discussions and outcomes [out of these meetings].”

Rwanda Union Mission president Hesron Byilingiro welcomed delegates and friends to Rwanda as he emphasized the pan-African nature of the event. “This is an event for all Africans and friends of Africa,” said Byilingiro, who also chairs the Rwandan chapter of the International Religious Liberty Association (IRLA).

Joel Okindoh, IRLA secretary general for the East-Central Africa region, seconded Byilingiro’s definition. In welcoming delegates from every region of Africa and also the Indian Ocean islands, Okindoh added that the organizers’ warm welcome included every guest from other continents who is also a friend of Africa.

“As long as you are here, you are all Africans. Maybe we could even give you African names, so you really become part of us,” Okindoh quipped.

In Rwanda, religious freedom is enshrined in its Constitution, Ruguri explained, in providing a rationale for the location chosen for the 2018 congress. “[Religious freedom] is a belief that was threatened by the genocide, but the country did not choose to abide in the shadow of the genocide.”

In 1994, after years of hostilities and hate speech, Rwanda’s Hutu majority set out to annihilate the Tutsi minority. According to figures from several organizations, in just 100 days, about 800,000 people were killed, and millions were displaced.

Ruguri acknowledged that the country showed great resilience after the genocide. “Rwanda has demonstrated a very high degree of tolerance,” he said in highlighting the current social and religious climate across the nation. “It’s an example of what Africa can achieve in a short time if [the continent] fosters a spirit of tolerance and peaceful coexistence.”

“Africa will realize its vision if it uplifts religious liberty for everyone,” Ruguri concluded.

The congress’s opening ceremony on September 13 highlighted the support that Rwandan leaders assign to freedom of religion and conscience.

“The government of Rwanda has a definite commitment to defend and promote freedom of religion,” said Judith Uwizeye, Minister in the Office of the President of Rwanda, in addressing the delegates. “The government understands that the foundation of progress is realized when people exercise their social, economic, political, and religious rights.”

In the aftermath of the genocide, the country could have chosen a different path, including one of revenge and ongoing unrest. “However,” Uwizeye reminded the audience, “we chose to stay together; we chose consensual democracy instead of confrontation, because Rwanda is based on harnessing the diversity of our people.”

From Words to Action

Church leaders made a point of highlighting that Rwanda’s support of religious freedom transcends words. Specifically, Byilingiro thanked the Rwandan government for respecting the Seventh-day Adventist day of worship.

In Rwanda, citizens and residents spend the last Saturday of every month in Umuganda, a mandatory day of community service. Based on Bible teachings about the seventh-day Sabbath, Adventists use that day as a special day of worship and abstaining from regular work activities. When the Seventh-day Adventist Church in Rwanda petitioned for an exception several years ago, the government offered Adventist church members the option to discharge their civic duties on the following Sunday.

“I thank the government for also granting Sunday as a community service day,” he said.