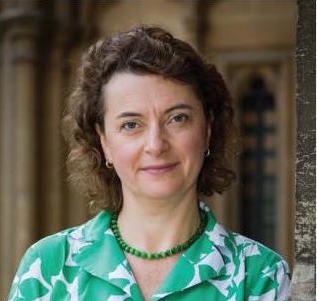 The MacMillan Center’s Project on Religious Freedom and Society in Africa invited Baroness Elizabeth Berridge of the Vale of Catmose to give a talk on September 25 titled, “Religious Freedom, Still a Global Priority?” As a member of Parliament, she sits on the Ecclesiastical Committee and is Co-Chair of the All Party Parliamentary Group on International Freedom of Religion or Belief. Since October 2015, Baroness Berridge has served as the Co-Director of the Commonwealth Initiative for Freedom of Religion or Belief (CIFoRB), a project that gives parliamentarians an avenue to address issues of religious freedom through education, research, and advocacy.

Baroness Berridge began by describing Article 18 of the United Nations’ Universal Declaration of Human Rights, which she called “the best and the fullest description in modern terms” of the right of religion. “It’s a human right,” she stressed. “It belongs to humans and communities. It does not belong to religions. It is not there to protect religions.”

Baroness Berridge went on to explain that while the internal right to one’s belief is absolute, the right to manifest one’s religion in the form of worship or practice can often be restricted by the state through legislation or policy.

She then provided historical background on the “right to religion,” noting that the push for religious freedom began alongside the push for racial equality. In 1965, the UN successfully held the International Convention on the Elimination of All Forms of Racial Discrimination. Baroness Berridge noted that there was a similar convention to address religious hatred and discrimination in 1972, but the member states were unable to come to consensus. She explained that “the best we have at the UN is the 1981 declaration… on religion and beliefs,” which lacks the enforcement power of a convention.

Baroness Berridge argued that religious freedom is still a global priority because there is so much work to be done, as demonstrated by a Pew research study. In the study, restrictions on the freedom of religion were categorized as either restrictions from the state itself or restrictions due to social hostilities. In 2016, 28% of countries had “high” or “very high” restrictions on the freedom of religion from the state and 27% had “high” or “very high” social hostilities towards religion. Baroness Berridge pointed out that although those numbers may not seem high, “when you look at the countries that it includes - like India or China - we’re talking about around 80% of the world’s population living in countries where there are ‘high’ or ‘very high’ restrictions on religion.” When considering these numbers, she urged audience members to remember that “these are people’s lives.”

Baroness Berridge next spoke about her role in CIFoRB as a parliamentarian. One of the first countries that the initiative targeted was Ghana, where most view the freedom to religion positively. Baroness Berridge reflected on an extremely successful two-day round table where Christian leaders, Muslim leaders, and even atheists came together to discuss religious issues in the country. She noted that any tensions about the theology of the atheists dissipated when the atheist leaders declared that they were Ghanaians first and atheists second. As she observed, “the national identity had not become synonymous with any particular faith.”

After discussing her involvement in CIFoRB, Baroness Berridge described her leadership in the formation of the International Panel of Parliamentarians for Freedom of Religion or Belief (IPPFoRB) in 2015. Despite its young age, the group has actively advocated for religious freedom by writing advocacy letters to different embassies, supporting refugees fleeing from religious persecution, and more generally “getting human rights norms more widely known among parliamentarians.”

Lastly, she emphasized the importance of support for the initiative from leaders of different backgrounds. Baroness Berridge noted that due to her narrow set of experiences and beliefs, the push for religious freedom “will only remain a global priority if people like me aren’t doing the speaking in the future.”

For more information about the Project on Religious Freedom and Society in Africa, visit its website.