Parents Sue Over Ban on Islamic Prayers at School 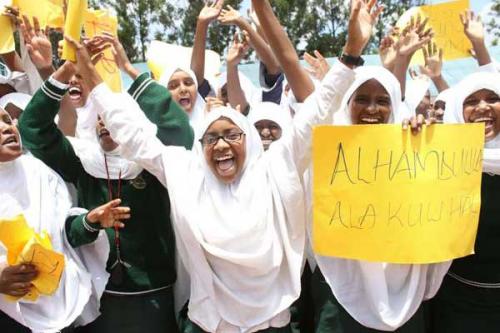 The battle over religious practice has once again been dragged to the courts.

In a suit filed by the Supreme Council of Kenya Muslims (Supkem) and a parent, the two petitioners are protesting against new policies that restricts their children from conducting Muslim prayers within the school compound.

They argue that Muslim pupils at Oshwal Academy had been going home over lunch hour for their dhuhr (midday) prayers but they have since been stopped from doing so.

Since the introduction of the policy barring parents from picking their children over lunch hour, the pupils had resorted to conducting their prayers in the classrooms.

However, the school issued a directive banning them having prayers within the school compound.

According to the petitioners, the management said it would not allow “ritualistic prayers at the school as one can pray in his heart where God lives”.

They said the directive is discriminatory against Muslims considering that Jain prayers are conducted during assemblies and opening days.

“The school’s board is coercing and making veiled threats through circulars which demand that parents should commit that their children shall abide by the new policies lest their enrolment at the institution is discontinued,” the parents said through lawyer Ali Mahmud Mohamed.

They argue that the threats are aimed at silencing them from pushing for their children to be allowed to exercise their religious rights, saying Muslim pupils should be allowed to conduct their prayers through the principle of accommodation under the right to equality.

The policy stopping parents from picking their children over lunch hour was introduced soon after the September 2013 Westgate terror attack that left 67 people dead. The school said the measure was taken for security reasons.