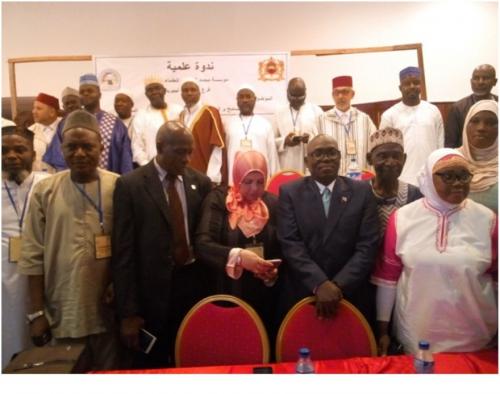 A two-day symposium, held at the Monrovia City Hall under the theme, “the Values of Tolerance in Islam, Moderation of Islam, and its Impact on Global Peace,” ended yesterday, September 11, in Monrovia, with participants resolving to fight extremism as well as promote peace, tolerance and unity among fellow Muslims and peoples of different beliefs.

The Islamic symposium, which assembled over 150 Islamic scholars from across Liberia, including government officials and guest lecturers from the Kingdom of Morocco, presented various topics, among them methods of cooperation and core values of tolerance and moderation in Islam; respecting the rights of both Muslims and non-Muslims and peoples of other faiths across the globe; preaching the principles of Islam and the Holy Quran and the good messages of Prophet Muhammad (PBUH); learning to be generous at all times to the humankind irrespective of religion, status, creed, race or tribe; avoiding the use of profanity against fellow human beings and doing away with extremism.

Several Islamic scholars from Liberia and the Kingdom of Morocco made a presentation on these topics, and participants were filled with the knowledge, the full understanding as well as the impact and objective of the training. Participants also discussed the role of Muslims in spreading the accurate picture of Islam by following the teachings of the Holy Quran and the tradition of Prophet Muhammad.

They were exposed to the principles of tolerance and the concept of moderation as taught by Islam from September 10-11, 2018. They then extended thanks and appreciation to Ameer Almunineen Muhammad VI in his efforts to consolidate peace and security around the globe and particularly in the Muslim world.

Sheikh Omaru Kamara, President of the King Mohammed VI Foundation- Liberia Branch, said the purpose of all the revealing scriptures sent down by the Almighty Allah is about respecting humankind.

“The scriptures call for respect for all mankind regardless of their tribe, creed, status in society, or religious affiliation,” he said, adding: “Allah created human beings in the best form from the day of creation by commanding the angels that He made. Allah has honored the human family on earth. Allah honors us by subjecting his creation to human beings, etc.”

Sheikh Kamara also lauded King Mohammed VI of Morocco and his foundation for its continued support to the country’s Muslim community, extending a similar gratitude to President George Weah. He also extended appreciation to the management of Monrovia City Corporation for providing its facility for the successful conduct of the symposium.

“Moderation and justice are characteristics of Islam. It’s therefore an obligation of all Muslims to follow these principles, including supporting tolerance and moderation,” Professor Atiqua Bouhouria of the King Mohammed VI Foundation and a member of the Moroccan delegation to the Monrovia symposium, urged.

The Mohammed VI Foundation is based in the Kingdom of Morocco.

“It’s important to note that religious freedom is one of the fundamental principles of Islam. Respecting the sanctity of worship places a cardinal responsibility on all Muslims. There is absolutely no need for Muslims to allow their differences to overtake the good principles of Islam. I therefore urge Muslims to cooperate and be tolerant with each other. Your religious differences should not stop you from practicing the perfect will of Allah, and I urge all Muslims to be kind to each other,” Professor Bouhouria further advised.