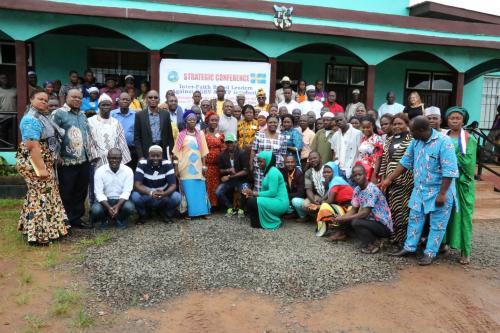 The leaders made the commitment in Buchanan, Grand Bassa County at the end a 2-day conference held under the theme, “The Role of Religious Leaders in the Fight to End All Forms of Violence Against Women and Girls in Liberia.”

This initiative is being sponsored by United Nations Entity for Gender Equality and the Empowerment of Women (UN Women), the Government of Sweden and the Delegation of the European Union.

The Inter-Faith National Governor Council also participated in the discussions highlighting the need for everyone to work together in addressing issues that affect women and girls and, at the same time, recognize traditional values, and culture as a crucial component for ensuring that men and boys as well as women and girls live together in harmony.

In their resolution, the leaders committed to use every Friday and Sunday, as well as every traditional meeting day to preach and teach on SGBV and harmful traditional practices.

“We realize that our faith and tradition calls for the respect of human dignity, traditional family values, and equal opportunities, irrespective of ethnic background, race, sex, creed, religion and place of origin; Faith-based Leaders shall establish a National Outreach on SGBV and Harmful traditional practices, its effects on society,” the resolution signed by faith-based leaders said.

The resolution said faith-based leaders have realized that domestic violence is a human rights violation, and therefore, recommend an act of legislature to address such issues, should they occur.

“Be it now resolved that the working group commit to use their various platforms and events to speak out, dialogue, preach, and teach messages on SGBV and harmful traditional practices at least twice a month,” the resolution said.

The UN Women Operations Manager/Officer-in-Charge, Yawo Maglo, raised alarm over the increasing rate of reports of SGBV and harmful traditional practices across the country.

Mr. Maglo said if nothing is done by Civil Society Organizations and government, there will be more cases and less prosecution. He emphasized the importance of unity among Muslim, Christian and traditional leaders in addressing SGBV and harmful traditional practices.

According to Maglo, the involvement of religious leaders in educating their followers against SGBV and harmful traditional practices will assist in making the society a better place for everyone.

Maglo recounted that few weeks ago, it was reported that three “heartless men allegedly raped to death a 30-year-old woman in Maryland County, and the alleged perpetrators have remained at large.

He said a government official was recently charged for sexual assault of a mother of two children that was only seeking a job, but the alleged perpetrator is yet to be brought to justice.

Mr. Maglo added that UN Women remains prepared to work with civil society actors, and human rights organizations to ensure that the rate of SGBV and harmful traditional practices are significantly reduced.

Imam Lansanah Abraham Keita, executive member of the National Muslim Council of Liberia, said the 2-day engagement has increased his knowledge on protecting women, and girls, “therefore, I remain grateful for the opportunity provided to participate in this year’s conference.”

“We will inform our people about the danger harmful traditional practices pose to women and girls. So, we need to protect them and also assure that those practices are abolished,” he said.

As Imam, Keita said the Qur’an has indicated that people who treat women and girls bad were enemies of human kind and deserve to be punished.

“People may have their own reasons for being cruel to women and girls, but I don’t think those reasons are enough. The organizers need to take this message to the various mosques, and churches to ensure that our people get the education on how to treat women and girls in a respectful manner,” he said.

According to Keita, the dissemination of said message in various places will help alleviate the ill treatment meted against women and girls.

Madam Musu K. Thompson, president of Governors of Liberia called for support from government and partners to educate traditional leaders in every part of the country.

Madam Thompson said that educating those traditional leaders about the dangers of Female Genital Mutilation, and SGBV will help the society in addressing harmful practices against women and girls.

She therefore called on Muslims and Christians to educate their children on the importance of some traditional practices, but to circumvent the harmful aspect of those practices.