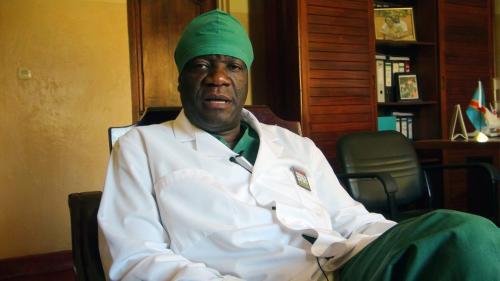 At a tender age, Denis Mukwege accompanied his father, a Pentecostal church pastor, as he moved around the villages of Congo’s South Kivu Province praying for sick parishioners. Those experiences inspired Mukwege to become a doctor — and later to found Panzi Hospital, a church-run facility in Bukavu, a community in eastern Congo. There, Mukwege has become known as the doctor who heals women suffering horrific damages after rape.

On Oct. 5, Mukwege and Nadia Murad, a young Iraqi human rights activist, won the 2018 Nobel Peace Prize for their efforts to end the use of sexual violence as a weapon of war and armed conflict in their countries. In eastern Congo, armed men have been using rape as a weapon of war in a prolonged conflict largely centered on the control of mineral wealth. The region is rich in tantalum, a rare earth metal, along with tungsten and gold.The 63-year-old gynecologist, a Pentecostal Christian, is the medical director at Panzi Hospital, where for two decades he has treated thousands of women and girls badly mutilated after being subjected to rape.

“I think they want to destroy the community. They rape in the presence of family members and the villagers,” Mukwege told this writer in an interview at Panzi Hospital at the peak of the violence in 2009. “I feel bad when I see children, the same age as mine, have been raped, and they have been destroyed. They have no rectum, no sex organs, and this has been done by men who just want to destroy. This affects me as a person.”

But at the hospital, survivors of sexual violence have been finding help.

The doctor has been performing reconstructive surgery, giving them a new lease of life. And when they leave the hospital, the women are also emotionally and mentally empowered, apart from receiving financial and educational support to help rebuild their lives.