Chief Imam Joins Christians To Worship Ahead Of 100th Birthday 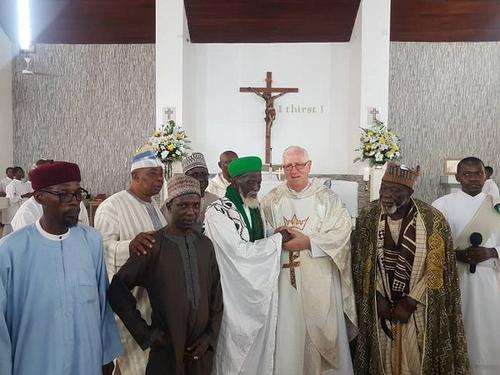 The National Chief Imam, Sheikh Osman Nuhu Sharubutu Sunday morning stunned worshipers at the Christ the King Catholic Church in Accra, when he stormed there with a powerful delegation during their Easter Sunday mass.

He was warmly welcomed by Father Campbell, and a colourful bouquet of flowers was presented to the Chief Imam before he was ushered into the Church.

The Chief Imam’s surprise visit was a reciprocal one to earlier engagements with former Archbishop of Accra, Gabriel Palmer-Buckle, and other Christian leaders.

The National Chief Imam turns 100 on Tuesday, April 23, and the surprise visit forms part of activities lined up to commemorate his centenary birthday anniversary.

Apart from the visit being a reciprocal gesture, it also forms part of the Sheikh Sharubutu’s life-long commitment to promoting inter-faith dialogue, and a peaceful co-existence between Muslims and Christians, the two dominant religions in Ghana.